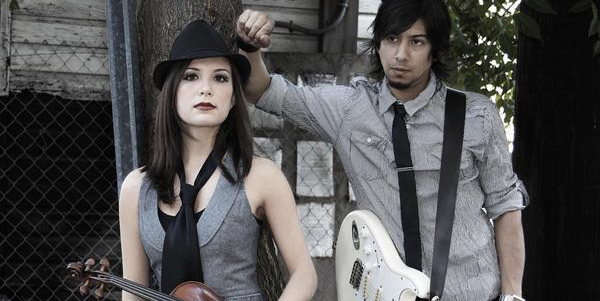 Red Abbey was formed by Thien-nga and Trey in 2008. This talented duo take their band name from an old church that was converted into condos. Although recently relocated to Las Vegas, Red Abbey performs regularly on both the West Coast and East Coast, captivating audiences with their own brand of blues funk rock.

Thien-nga’s time and effort to answer all of RiceburnerFM’s emailed questions are greatly appreciated. Since Thien-nga handles the interviews for Red Abbey, her responses are listed as Red Abbey.

RiceburnerFM: On the Red Abbey website you state, “After jamming together at a party, these two knew they had to make music together”. Talk about that moment. Was it zen? An epiphany? Did you each sense a kindred spirit?

Red Abbey: It was more like all the above. Sometimes when you play with another musician there’s almost like an unspoken understanding of what the other is thinking and feeling with their music. That’s how it was for both of us, we have a similar writing style and the music and lyrics seemed to just flow together without having to force- we knew we were onto something- thus began forming our group Red Abbey.

RiceburnerFM: Red Abbey is a band, but it is also a partnership. What does each partner bring to the band?

Red Abbey: We each bring a lot to the band. Trey is the genius behind the music, he writes all the parts and for our album did part of the production and engineering. As the lead singer I write almost all the lyrics and do all the business side of Red Abbey- booking shows, interviews, tours etc. Together we make a really great team, what one can’t do the other excels at it works out really well.

Red Abbey: Trey is Spanish / Mexican and German. I’m half Vietnamese / Irish / Dutch / Welsh. I think that being multi-cultural has made us both very well rounded musicians. We can relate to different cultures and both have been influenced by different artists that we listened to growing up.

RiceburnerFM: You both have had college level classical music training, but was there anything that you wish you learned in school? Did you take any music business classes?

Red Abbey: Both us had a pretty good college education. Trey learned about music business in college at Breklee and also worked for a few different labels outside of school. I’m very detailed oriented and have basically taught everything that I know to myself, a lot of the business side just came naturally to me.

RiceburnerFM: You tweeted recently that Red Abbey has plans for a new full album with that in mind, what is your creative process like? How do your thoughts become the final product: a song? Which song is the best example of this process?

Red Abbey: Songs are always in the moment for us. We could be driving on tour, flying or just walking around and I’ll think of a cool lyric or idea and have to write it down. From there the song is really easy to write and Trey is so creative with coming up with the music we can get a song down in just a few hours. The whole full length album has a similar theme; getting to that next step and not letting anyone or anything stop us. We’re hoping that with all our new songs that we are adding- our fans and the listeners will get a strong idea of where we come from not only musically but just as normal everyday people.

RiceburnerFM: Red Abbey relocated from New York City to Las Vegas, what went into making this decision? What new doors has it opened for your band? There are a lot of distractions in “sin city”, how do you stay focused?

Red Abbey: We did move our band to Las Vegas but we don’t consider ourselves a Las Vegas band. Being here has made it easy for us to play all up down the west coast as well as fly back to NYC for shows and tours- we consider ourselves to be bi-coastal. Even though we are new to Vegas a lot of opportunities have been presented and within just two weeks of being about here we were picked about by an Entertainment company that helps us with some of the booking. We haven’t been distracted at all since we’ve been here. Although there is a lot going on in Vegas it’s still just another city and we know we came out here for our band and that remains our focus everyday.

RiceburnerFM: Have you noticed any differences in the audiences as you tour in various cities across the U.S.A.? Good or bad, what was your most memorable experience on the road?

Red Abbey: We’ve had a lot of similar experiences in all the cities we’ve played in. I believe that because our music is so diverse it’s easy for a lot of people to relate to and enjoy. However, our favorite experience would definitely have to be touring the west coast in February this year. We had a great show in San Francisco at a venue called El Rio where a lot of our friends and family came out to- it was nice to be able to show everyone what we’ve been up to on the East Coast.

RiceburnerFM: As actual performers who have the talent, training and guts to stand in front of a live audience, how do you feel about music based video games, such as guitar hero and rock band, that allow players to simulate performing? Is the time spent playing a video game better spent learning to play actual instruments?

Red Abbey: Well obviously we think learning an actual instrument is better, but at the same time learning an instrument takes a lot of time devoted to practice, perfecting your technique, reading music etc. For those who don’t have the time to spend learning an instrument the games are great, they allow the everyday listener to see a little bit of what it’s like to be a musician just through playing a few songs.
RiceburnerFM: As a professional musician, do you still enjoy music? Do you find yourself critiquing or analyzing the works of others instead of just listening to their music?

Red Abbey: Of course we still enjoy music. Music is what drives us everyday and hearing other musicians do what they do is that much more inspirational for us to create new songs and get better at what we do.

RiceburnerFM: Tell potential fans what Red Abbey considers to be a successful gig.

Red Abbey: A successful Red Abbey gig is when we feel like we’ve really connected with the audience. We’re up on stage performing but we can see that everyone is enjoying the music, dancing, singing along etc. It’s great when after a show we have fans- new and old coming up to us saying how much they loved our music and that we gave a great performance- that alone is what keeps us going and inspires us to create more.

RiceburnerFM thanks Thien-nga of Red Abbey for graciously answering all of these questions.
RiceburnerFM invites you to check out the Red Abbey EP … On My Way.
Available on Amazon.com!

One thought on “Thien-nga of Red Abbey Interview”