Music Review of /(U.U)\ by Poni-Camp from Japan

Lets all take a musical trip to Poni-Camp!

Poni-Camp is a three piece female fronted band, this is their first album entitled with emoticons … /(U.U) or just Uu (cute / timely but annoying to type). Enapu the singer / guitarist was a member of the all girl punk band and Riceburner.FM favorite LOLITA No.18, she also illustrated the CD’s 80’s Pacman inspired graphics. Joined by Rei on bass and Nakajima Nobu on drums, they are and have been seen on American tv as Puffy AmiYumi’s backing band.

On their myspace page, Poni-Camp refer to themselves as a Japanese punk band, but with some ear friendly, well crafted positive love songs in English, they have pop down as well.

Yes it is a small world after all

The tunes are sung in English, Japanese or a combination therefore of. Most of the tracks go on a little too long, but the standouts include:

Sing … a Ramones styled loud and fast blast with hard to make out English vocals, but that is not a detraction.

99 Red Balloons … an excellent English cover of a German song by a Japanese band. Yes it is a small world after all.

The Take Away:
Riceburner.FM recommends /(U.U) by Poni-Camp.
There are a couple of real rip’em up punk rock and roll tunes and some breezy pop, worth it for the 99 Red Balloons (99 Luftballons) cover alone.
Available from Amazon.com! 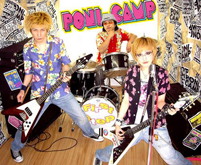