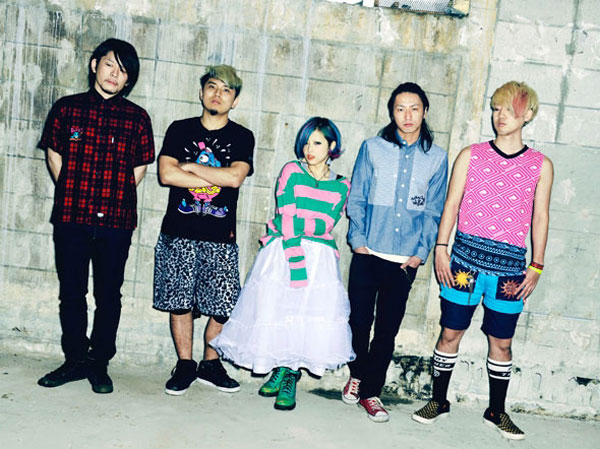 TRIAMPERSANDY formed in 2011 as part of a G-YUN solo project. The band is made up with former members of GOLLBETTY and ketchup mania, G-YUN aka G-YUNcoSANDY on Vocals, MISSY on Guitar, HIDE on Guitar, Ryo-Hey on Bass and Keyboard and WANI on Drums. Together as TRIAMPERSANDY, they make music with a catchy pop-punk sound.

G-YUN was kind enough to represent the band and answer some questions via email.

RiceburnerFM: Take us step by step through Triampersandy’s creative process. Who does what and how is a song created?

TRIAMPERSANDY: G-Yun: Our song creation process is varied. The number 1 way in which we create a new song is to start with a guitar riff and then build on to that. Guitar riff, followed by drums, bass and then usually one chorus. After we have that in place, we add the vocal melody and lyrics. We spend a lot of time making sure the lyrics fit who we are. Making sure the vocal melody is catchy and high energy is the most time-consuming. The instrumental portions of each song is usually handled by the person who started the song in the first place.

RiceburnerFM: How important is it for Japanese bands to establish an international fan base? What is Triampersandy is doing to reach out to their overseas fans?

TRIAMPERSANDY: G-Yun: In Japan today, it’s difficult to sell CDs. However, there is a victory associated with getting your music or band outside of Japan. I think a lot of Japanese bands are interested in playing abroad.

Triampersandy has just begun so we’re really focused on putting a lot of stuff on YouTube, although so far we’ve only put up our single “ROLLY-POP.” We feel that music and video go well together so we want to focus on YouTube. We’ve also made a Facebook page to reach out to English-speaking fans.

RiceburnerFM: The members of Triampersandy have had success while in other groups. How is Triampersandy different from your earlier band?

TRIAMPERSANDY: G-Yun: The members of Triampersandy really construct all of our songs to be different. Compared to previous bands, we can represent a wider genre of music to the world. We really have a lot of different types of songs. From now on, we want to be unpredictable and to keep challenging ourselves moving forward.

RiceburnerFM: RollyPop is the first single from your new album “Planet of the Triampersand.” If you could make “Rolly-Pop” the opening song for any anime that you wanted to, which anime would it be and why?

TRIAMPERSANDY: G-Yun: I think that “ROLLY-POP” fits well with the anime TIGER&BUNNY! But if we’re talking outside of Japan, I’d like it to be tied up with NARUTO or BLEACH. Anime is popular outside of Japan so if we were associated with such a famous anime, that would be great!

RiceburnerFM: Television and movies often portray musicians as living an outrageous rock and roll fantasy lifestyle. So what is the most outrageous thing that you have done in your rock and roll career so far?

TRIAMPERSANDY: G-Yun: During the middle of a tour, our tire exploded on the highway and we had a big accident. The car was totaled. MISSY lost his license … but! Luckily, no one was injured even though we were bounced around like pinballs. It was crazy like a 3-ring circus. It’s miraculous that everyone was okay. Unfortunately, MISSY still can’t get his license back. He always says “The money to replace my license is impossible!” LOL! : )

RiceburnerFM thanks G-Yun of Triampersandy for taking the time to answer these questions. Triampersandy’s new album PLANET of the TRIAMPERSAND is available now. Thanks to RESONANCE Media for setting up the interview.