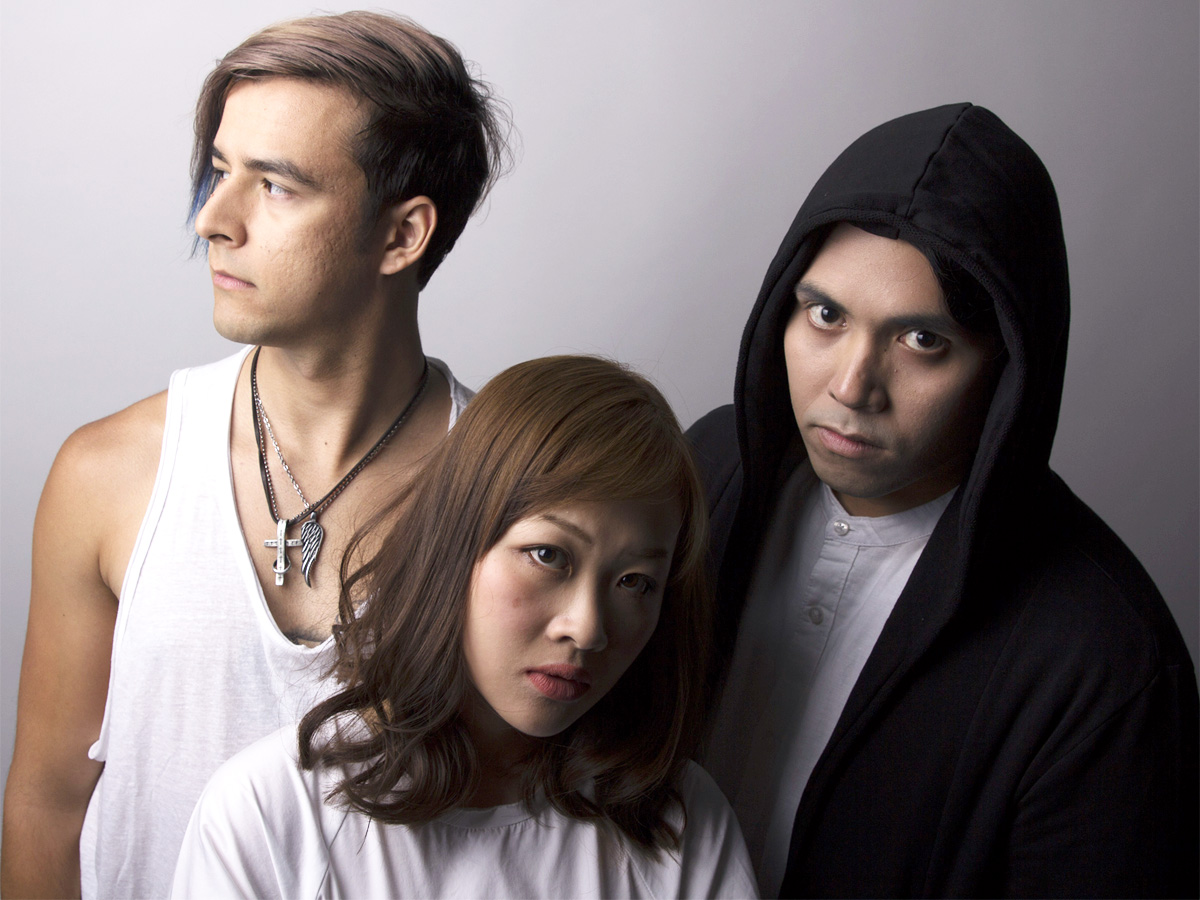 Inspired by Japanese rock music, but hailing from the greater Toronto area, Ontario, Canada,
HOSHIFURU is Maria on vocals, Nan on guitar and Nick on bass. They were kind enough to answer some questions via email.

RiceburnerFM: How did HOSHIFURU form and what was the thought process behind your band’s name?

Maria: First of all, thank you RiceburnerFM for reaching out to us for this interview. It truly means a lot to us! The band was formed by me and our ex-keyboardist Kayla. We didn’t do much until Nan joined the band as our guitarist in early 2008.

Nan: Yup, we actually originally formed with a different line-up in 2008, but we weren’t really doing anything so I don’t consider that time until 2012 as HOSHIFURU being an actual active band. Nick and our ex-drummer Danny joined Maria and I in 2012 and that’s when we started recording and releasing music, playing shows, and getting our name out there.

Maria: I came up with the name HOSHIFURU. The story behind it may sound somewhat silly, but it’s based on one of my fondest memories as a child at camp with my family. We saw shooting stars that night and it was incredible. I didn’t have the best times, growing up in a dysfunctional family, but that night stood out to me the most. It is still one of the happiest moments in my life.

RiceburnerFM: Describe HOSHIFURU’s creative process. Who does what and how is a song crafted? Is the songwriting process something that you can turn on and off or do you need inspiration to start?

Maria: Our music and lyrics aren’t written at the same time. Nan does his thing and I do mine. The process is weird, but it works for us. The lyrics are always inspired from everyday situations — how I feel at the time or something that needs to be out there. I’m not the best at describing my feelings by conversing with people unless you’re someone I’m truly comfortable with. Otherwise, I find it easier and more soothing to write it in the form of lyrics and to sing it out.

Nan: I write all of our music by myself. I’ll usually send a demo of a new song to the others, they’ll learn and elaborate their parts (in Maria’s case, she’ll write lyrics and vocal melodies), and then we’ll try the new song out at a jam when everyone’s ready for it. The songwriting process is really hard for me and I definitely can’t turn it on and off, haha. What usually inspires me are… sad moments in my life, haha. I think I have a very personal connection to our songs and I can even remember the exact moment inspiration hit me to write certain songs. I think it’s funny how a lot of people think our music is fun and upbeat due to the strong pop and dance music influences when in reality, it’s an outlet for my negative emotions, haha.

Maria: For the longest time, HOSHIFURU was more of a hobby for me. I didn’t want to become a musician. I thought that “making music” or “being in a band” will give me a cool girl status. It was nothing more than a project at first. As we got more serious with the band, more people recognized our name and were drawn to our music. The more compliments and positive reviews we got, the more I realized that maybe I can be a musician. Maybe I’m actually good at what I do and that people appreciate the music that we create. So maybe this is what it’s like to be a musician. It felt good. From that point on that made me really want to be a musician. Although I still don’t consider myself as one, I certainly enjoy what I do and I’m happy that people appreciate it.

Nick: I always used to listen to music and like, casually play, but it wasn’t until I went through a really bad breakup back in college that I started taking it seriously. I split with this girl and basically holed up in my room and played bass for like, 2 months straight. I didn’t get good grades that semester, haha. But music, it’s cathartic for me.

Nan: I don’t think I’m really good at anything else and I think our music is pretty good, haha.

RiceburnerFM: HOSHIFURU is a Canadian band that plays music inspired by J-pop, J-rock, and visual kei, but how would you describe your sound to someone who is unfamiliar with these Japanese music scenes?

RiceburnerFM: HOSHIFURU have been together since 2012, how does your band stay focused and motivated?

Maria: Listening to music — not just one type but several. HOSHIFURU’s music is influenced by many genres since the band listens to a variety of music. Most importantly, our fans give us motivation! We try to keep in touch with them as often as we can. Honestly, we wouldn’t be around today if it weren’t for them. In fact, some of them have become our friends for life. I would like to use this time to thank you all for your continuous support and we enjoy connecting with all of you!!!

Nan: Yup, it’s honestly the truth, we appreciate and love every one of our fans for motivating us with their support!!

Nick: Yeah, sometimes it’s hard to stay driven all the time, but the amazing support we get from fans (the funs!) keeps us going!

RiceburnerFM: HOSHIFURU lead singer Maria gets a rough vocal workout on some of your screamo-ish tracks, what does she do in-between gigs to keep her voice in good shape?

Maria: Hot honey lemon water and plain ol’ water — LOTS of it! I recently learned that honey is the best thing to ingest either regularly or right before the gigs as it coats your throat. I highly recommend this trick after playing our EP release show recently. I was recovering from a cold and I lost about 91% of my voice, yet I used up the remainder of my voice anyway! If we’re recording that day, water is all I drink. If we’re playing a show that day, absolutely nothing but water, not even alcohol. I also quit smoking and it did wonders for both screams and especially clean vocals.

you can create something with love and respect

RiceburnerFM: HOSHIFURU’s album cover art is visually striking, how important is it for a band to make a visual impact to compliment their sound, especially in this post physical album / digital age?

Nan: Visuals are very important, especially with how saturated the music scene is right now. It doesn’t matter how different and original your music is anymore, you need the proper visuals to complement your music to get someone to check it out in the first place and then hopefully they’ll listen to and enjoy it. Our friend Jake (http://jalbhenn.tumblr.com) created the album art for us based on an idea I had. I wanted the art on HOSHIFURU 2 to be more beautiful and mature compared to our previous releases since I think you can hear that change in the music as well. We’re so happy with what Jake created for us, but honestly, we weren’t surprised since he’s such a great artist!!

Nick: Yeah, mad props to Jake for sure! And bands really need to be the complete package these days — your look, sound, your online presence with social media and everything, fan interaction, it’s all gotta be very cohesive to stick.

RiceburnerFM: Recently the related topics of whitewashing, diversity and cultural appropriation have made headlines in the entertainment news media, any thoughts these subjects?

Nick: This is a real landmine of a topic, haha. It’s weird, all of us come from different ethnic backgrounds and we’re all minorities in the traditional sense. Nan and Maria have lived all over the globe, so their experiences may be different. But you grow up in a city like Toronto where there’s different cultures everywhere, and you’re exposed to all these incredible, diverse lifestyles all in the span of a few blocks, and that’s so neat. I think you can look at and take inspiration from a culture that you’re not necessarily born into, but exposed to and genuinely interested in, and you can create something with love and respect that can contribute to a scene. It’s all about that respect though.

RiceburnerFM: If there was a big budget anime movie based HOSHIFURU, what artists would you want to be on the soundtrack?

Maria: Oh, that’s a tough one! I don’t think I can come up with even just one. I would throw CRETEM (https://cretem.bandcamp.com) into the mix, though!

Nick: Everyone knows I love BUMP OF CHICKEN, haha. I’d love them to do one of the softer, sadder scenes.

Nan: I think HIROYUKI SAWANO doing the whole soundtrack would be amazing, haha.

RiceburnerFM: HOSHIFURU performed at the Anime North convention several times, do you have any advice for other bands about preparing for an anime convention gig?

Maria: Make sure you are well rested before an anime convention gig you play because you have to be quite energetic, not just to focus on your set, but also to be able to have lots of fun! Having fun, giving an energetic performance, and simply going nuts will help pump up the crowd. Also be interactive and engage with the audience! We tend to stick around after our sets for as long as we can just to have a chance to connect with them. There are plenty of people who want to come up to you for a chat if they’re interested in knowing more about you and your band. They’re all super friendly folks! Choose an eclectic mix of songs — some intense/hyper tracks and some slow jams!

Nan: Have an actual interest in anime and/or Japanese culture instead of just doing it for money, exposure for your band, or just so you can say you played at an anime convention.

RiceburnerFM: 2017 is just weeks away, what are HOSHIFURU’s resolutions for the new year?

Maria: We want to release more music and to perform around Canada and try to touch some parts of America. More importantly, we want to expand our music some more, and to let everyone know that we have a growing J-music scene in Toronto! Performing in Japan is at the top of our list, so… please help us make that happen!!!

RiceBurnerFM thanks the members of HOSHIFURU for taking the time
to answer these questions.