Music Interview with Laurier Tiernan of nature airliner based in Japan 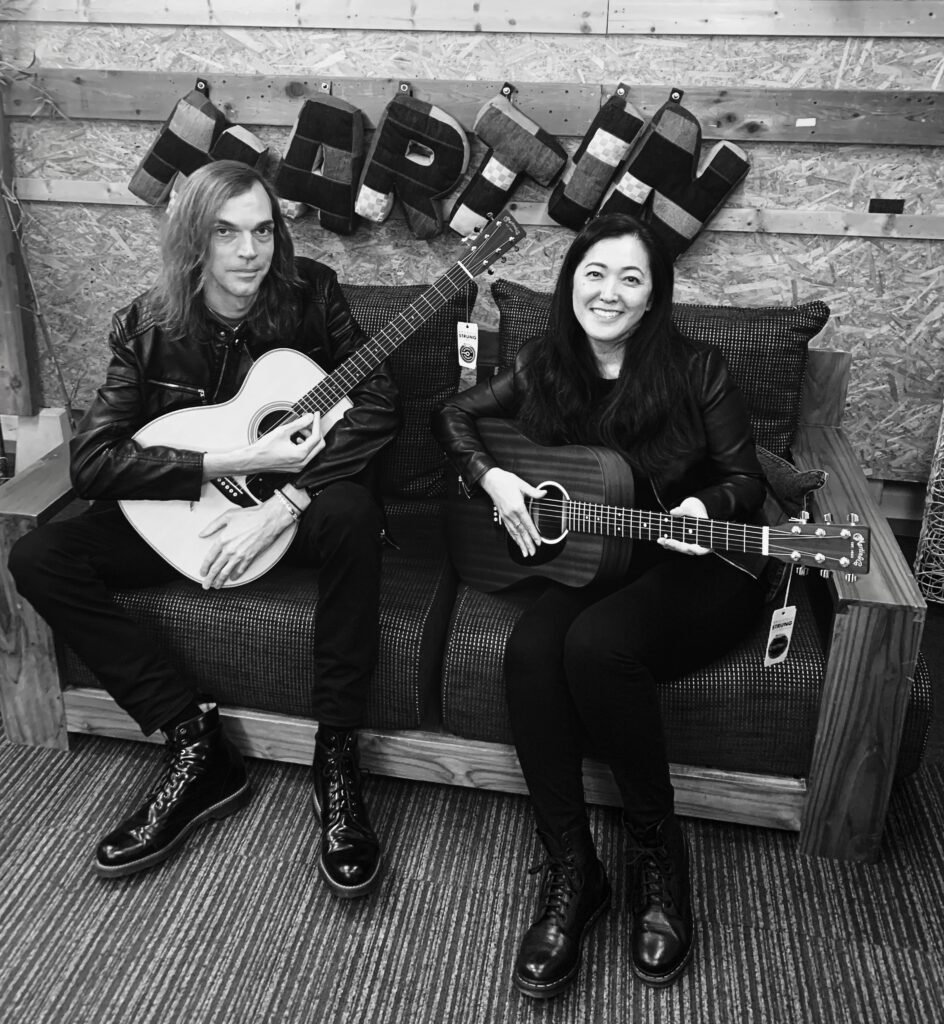 nature airliner, the folk duo from Tokyo, Laurier and Eiko

nature airliner is a folk duo from Tokyo, Japan. Its members are Laurier Tiernan and Eiko. Laurier Tiernan graciously answered a few questions from RiceburnerFM via email.

RiceburnerFM- You are from Canada, now based in Japan, what inspired you to move to Japan? A popular belief is that Canadians are polite. While Japan has a reputation for being xenophobic to outsiders. How does your location affect your songwriting?

Tiernan: In 2002, a year after I had won a minor award for my solo career in British Columbia, I felt like I had hit a brick wall. And, since a fellow Canadian buddy Leon McCormick had started the now-defunct two-eight records just west of Tokyo – and wanted to release an album of my work – it just seemed like the logical next step. The Japanese entertainment industry is pretty hermetic and can seem xenophobic, as you said. I don’t know if that aspect of Japan has affected my songwriting. Some people say that they’ve noticed a bit of a “Japanese flavour” seep into my guitar phrasings, however, if anything, I’d say that living here, my songwriting has just become purer and more distilled than it ever was before. It’s like the isolation I feel from society, in general, has made me focus more hermetically than ever on my craft. Although, I had never thought about it in that way until you asked me.

RiceburnerFM- Is your creative process something that you can turn on and off or do you need the inspiration to start working? Talk about your process, and give a step-by-step breakdown on how to craft a song.

Tiernan: As I’ve told many people before, generally there are two main ways that songs come to me. One way is that I hear a snippet – maybe a chorus – in my head as I go about my daily life. And, if it’s good, then I’ll sit down and build it up around that core. The second main way – which is how I’ve written most of my songs – is just a process of self-discipline. I go through mindful periods of my life where I sit down at my desk and write lyrics much like one would work out in a gym. Then, the lyrics that I fall in love with get treated to a musical development. I feel that inspiration may be for the lucky and the lazy. And, although, I have been lucky, I never want to regret being lazy.

RiceburnerFM- You are also a published poet, do you have a separate creative process for writing poetry?

Tiernan: When I was younger, I basically just wrote poetry when I was inspired. Then, when I set a goal of getting published for the first time, I sat down daily until I felt that I had enough work to fill a publishable book. And, most recently, I have adopted Leonard Cohen’s old practice from the 1960s of making sure I write three pages a day. So, yeah, it’s different from my songwriting process. I would say it’s more disciplined if anything.

RiceburnerFM- In another interview, you mention your admiration for Leonard Cohen. You recorded in Columbia Studio A, where Cohen recorded two of his albums. What was it like working in a space that many would consider hallowed ground?

Tiernan: Oh, it was amazing. It was a lifelong dream, and it was a dream come true to be granted permission for it. I still can’t believe it, and we hope to go back. Eiko used a mic that Johnny Cash had most probably used to record “Ring of Fire,” so, that gives you a small taste of the shoes into which we were stepping.

RiceburnerFM- As a solo artist, in one word, what do you look for in a collaborator? As nature airliner with your partner Eiko, you have toured various countries. What was your favorite venue to play in and why?

Tiernan: I guess, as per your request, in a word, I would say I look for “resonance,” in a musical collaborator. It’s not that I think I’m amazing but, many people have wanted to work with me in my career, and I have turned most people down; many whom – I imagine – are better musicians than myself. I think I’m just a painfully unique creature, and letting people in like that is much like romantic intimacy; if your vibrations aren’t in synch, you risk getting hurt – at best – or wasting precious time, in the worst case. For me, it’s just too uncomfortable, unless I can feel unconditional love. And, that’s why I’ve worked with very few people.

RiceburnerFM- nature airliner is an acoustic duo, does today’s rapid change in technology affect your music?

Tiernan: Yeah. I’ve often thought our situation is much like Bob Dylan’s before he became famous; in his day the charts were filled with the era’s equivalent of girl groups and boy bands, with no acoustic guitars in sight. So, our staunch insistence to remain anachronistic has set us at odds with the prevailing market trends. However, I do have hope that our steadfast vision will eventually find its market, and, perhaps, some breakthroughs.

RiceburnerFM- nature airliner’s “Letting Go” screened at the Birmingham Film Festival in England. How was the response to your video there?

Tiernan: Well, the response was good enough that we were selected to be screened, among countless people who applied and failed. I don’t know if we won anything, though. I haven’t heard back from the director yet.

RiceburnerFM- Do you have any last-minute rituals that you perform before going onstage?

Tiernan: Eiko says she prays to “The Guardian Spirits” and all the angels. I myself tend to do a basic vocal warm-up, make sure I am hydrated, and fake through all the chord changes that may be tricky under spotlights.

RiceburnerFM- How have the pandemic and other current world crises affected your music-making?

Tiernan: That is a good question! We were booked for a big festival in Lithuania that was to take place in August 2020, but, of course, our performance was shelved due to the pandemic. It was such a blow, particularly because there was talk of a possible Eastern-European tour being tagged on after it. We basically went into shock and put everything on hold until we could see a light at the end of the tunnel. Finally, this year, we released our album Cardinal as well as the video for “Letting Go”. And, now we are sussing out what we want to achieve in 2023.

RiceburnerFM- What is the single best piece of advice another musician has ever given to you and did you follow it?

Tiernan: In the first few decades of my life, I (Tiernan: guitar) often struggled through wondering where I should apply my focus. However, a few months ago, an elder musician whom I admire greatly, told me, “Laurier, everything you do in your career makes a great tapestry. So, just go forth without a fear, and make art you feel called to do.”

RiceburnerFM appreciates Laurier Tiernan of nature airliner for taking the time to answer these questions.

nature airliner
“End it (With Me)” Official Music Video
https://youtu.be/TgqDa_HFvX4