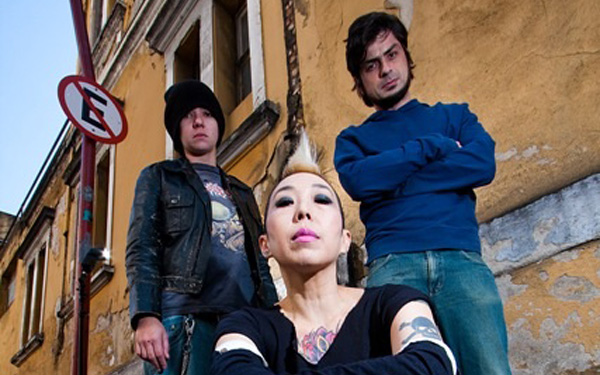 Hellsakura is a female fronted trio based in São Paulo Brazil, their members are Napalmer on Bass, Pitchu on Drums and Cherry Sickbeat on Guitar and Vocals. They are currently celebrating their third year of rockin’ together. Part of the exciting and eclectic mix of diverse cultures that make up South America, Cherry is a Brazilian national of Japanese descent. She speaks Portuguese and Japanese, but she performs in English. Her grandparents came from Osaka and Kumamoto ken, part the post World War I immigration from the Japanese rice fields to the Brazilian coffee plantations.

Cherry emailed some rather interesting responses to RiceburnerFM’s questions.

RiceburnerFM: What is your musical background? Are there any other musicians in your family? What was the song or album that made you want to play music?

Cherry Sickbeat: I´m a very lucky person because I had  the chance to start studying music since childhood and I played shamisen before playing guitar and drums, but when I saw and heard Poison Ivy on guitar I changed my mind completely. The album was “Bad Music for Bad People” by The Cramps. Shamisen is a traditional Japanese instrument. My grandmother encouraged me to start something new and Poison Ivy taught me something weird and cool at that time!

RiceburnerFM: You have been in other bands before, how is Hellsakura different?

Cherry Sickbeat: Okoto was my first band. There were two guitars and the sound was metal and hardcore. Though I needed to be very strong on vocals and playing very well, with the girls from Hats I played the drums and the lyrics and the garage sound made a certain difference with Elektrobillys. We played psychobilly and Romulo (Bad Lucky Gamblers) played the double bass. We played at several festivals but no album was recorded. I think that punk rock and metal are the backbone of Hellsakura.

RiceburnerFM: Brazil’s official language is Portuguese, it has the largest Japanese population outside of Japan and Hellsakura performs in English. How does this mix of cultures affect your sound and / or songwriting? How is the South American music scene unique?

Cherry Sickbeat: Sometimes I feel very strange (@ @) … I always wrote lyrics in English, Portuguese and sometimes in Japanese but Brazilian rockers are used to this because their families come from various places like Italy, Germany, Turkey, Korea, Africa etc. And in Japan you know most bands write in English also. But the old school punks maintain Portuguese as the first tool of communication. And I respect this. South America is a mix of cultures and that’s the reason rock can be understood in all languages!

RiceburnerFM: You tweeted recently, “Searching for a inspiration to a new album … give me wings onegaishimasu”. How goes that search? Have you gotten your wings yet? Describe your creative process.

Cherry Sickbeat: Life sometimes can become very boring and people need music, including me! So I feel I need a change in my body, in my mind or attitude, to be able to have a new vision maybe a new song. Sometimes a deep kind of pain can translate into words, so I seek an atmosphere on the guitar then I get closer to what I´m looking for. I think that female musicians can do that very well! Specially with wings …

RiceburnerFM: You have toured outside of Brazil. How has the response to Hellsakura varied from country to country. Go through an average day on the road.

Cherry Sickbeat: We have not yet done long tours but we´re going to Europe in October and we´re very excited. The Japanese tour last year was incredible. Being together for days on the road is not easy but we love what we do!

“Punk Rock and Metal are the backbone of Hellsakura”

RiceburnerFM: What are your thoughts on performers and bands that are enhanced in post production? Is their work valid?

Cherry Sickbeat: All post production in studio or support for release of new material is ok by me. If this keeps true, let´s go. I think the band must know what is best for them.

RiceburnerFM: All bands have a hard time getting air play on the radio and TV, but is it even necessary in this age of YouTube?

Cherry Sickbeat: I really don´t think so because people have spent more time on the computer than watching TV, but the reference to the director and editor is the high quality and high resolution television provides us. At the same time when I´m recording an album my reference is one good sound with quality. The studios have to be well equipped to also record audio discs and after that mp3 formats. But nowadays we always think of YouTube first before sending the edited video clip in high definition to TV. TV itself accepts that and like the video game industry they have joined the web instead of boycotting it.

RiceburnerFM: How do you as a female musician deal with sexism in the music industry?

Cherry Sickbeat: That´s a sensitive issue because if we talk in terms of million albums sold we will only be talking about the cliché of female pop music you already know. Within rock chances are the same but there are a lot more male bands than girl bands in action and this proportion makes a difference. I don´t know exactly what is needed to close a big deal with a major label but I’m sure the audience likes to see women playing an instrument so I think they should pay more attention to the goddesses of rock and their pupils. The goddesses of rock that always protect me from myself are: Wendy O Williams, Joan Jett, Poison Ivy, Debbie Harry, Lita Ford, Poly Styrene, Susy Four (Quarto?) and all Girlschool! They really rock my world.

Cherry Sickbeat: A light at the end of the tunnel.

RiceburnerFM: Any of your fellow South American performers to check out? Plug Hellsakura! Any thing to say to fans and potential new fans?

Cherry Sickbeat: Of course would love to introduce to Riceburner.FM readers some girl bands like The Biggs (Br), She Devils (Arg) and Diabatz (Br), The Human Trash (Br). Hellsakura would like to say, “Always keep rock alive inside your heart and you will always be alright!”

RiceburnerFM thanks Cherry Sickbeat of HellSakura for being very generous with her time and answering a few questions. It’s their birthday, but you get the presents! Help Hellsakura to celebrate their third birthday by going to their website and downloading some free Hellsakura MP3s!