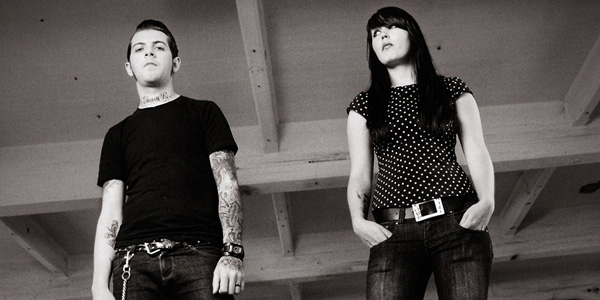 A Marriage made in Rock and Roll Heaven

Sinner Sinners are Steve Thill on guitar, bass and vocals and Sam Thill on keyboard and vocals. They were both raised in rock and roll friendly households, Steve in France with the Doors, Bowie, Alice Cooper and the Sex Pistols playing. Sam is half Indonesian and was born in the Netherlands. Her family relocated to France when she was six. Her father listened to Zappa and Hendrix and her uncle a “huge Hair Metal Fan” enjoys Kiss, Van Halen and Motley Crue.

The couple met in junior high and have been together ever since. Steve and Sam married and in the summer of 2009, they started the band. Sinner Sinners are performing full time, rocking their fellow Europeans and making a name for themselves on the West Coast music scene.

RiceburnerFM: What are your musical backgrounds? What do each of you bring to Sinner Sinners?

Sinner Sinners: We’re really influenced by different kinds of music such as Punk rock, Hardcore, goth, garage and even early Heavy metal. Misfits, Danzig, Murder City Devils, the Damned, Lords of the New Church, Black Flag … I think we bring the punk and Mike our guitar player is the one that brings the Heavy touch …

RiceburnerFM: You are partners on stage and off, how do you switch the personal and the professional aspects of your lives on and off?

Sinner Sinners: Yes we are married, we’re a couple before all and doing music together. That means we never switch off.

RiceburnerFM: According to your mySpace page, you call your music Horror Punk and draw upon early goth rock, ’77 punk and 80’s Californian hardcore for inspiration. Describe how Sinner Sinners synthesizes these influences into fresh sounds for the 21st century?

Sinner Sinners: It’s a mix of everything we like, we have some songs with a rockabilly background that switch with a moshing part and a heavy metal solo at the end … We’re not afraid of mixing styles. The only important thing is playing loud and fast with a lot of energy.

Sinner Sinners: The album is gonna be available in fall 2010 maybe winter. We hope people will enjoy it and make them want to come to the shows.

RiceburnerFM: What is the one song you need on a road trip or in your case as professional musicians … on tour?

“The only important thing is playing loud and fast with a lot of energy.”

Sinner Sinners: It would probably be Come Alive by Doomriders or Plan 9 Channel 7 by the Damned, Dave Vanian is the Man!!!

RiceburnerFM: Regarding music originally created as art, then licensed for commercial soundtracks, can an artist still be taken seriously if their music is, for lack of a better word, “repurposed” to sell products?

Sinner Sinners: I guess it depends on what the music is used for. David Bowie sells mineral water, Iggy pop sells cell phone contracts … the Ramones sold some Diet Pepsi … Are they taken seriously???

RiceburnerFM: Your band is based in France. Despite a mutually beneficial international relationship between long time allies America and France, the far right in America are openly hostile towards anything French. While touring in the USA, have Sinner Sinners run into this Franco-Phobia? Conversely, are your fellow Frenchmen upset when you perform in English?

Sinner Sinners: We’ve only been on the West Coast but it seems like all the people we met were very friendly to us, and no one in France is upset about us performing in English.

RiceburnerFM: The media has often featured cases of misguided youths injuring themselves or others supposedly inspired by various songs. Given the slightly dark nature of your tracks, what do you say to the concerned parents of impressionable young fans?

RiceburnerFM: From Elvis to the Ramones, many entertainers are arguably even more popular once they are gone then in their prime. In light of that, what will Sinner Sinners’ musical legacy be?

Sinner Sinners: For now our legacy would be a 12 track album and a few stickers.

RiceburnerFM: Any of your fellow performers on the French scene to check out?

Sinner Sinners: Sure, our best friends, some of them are featuring on our album, The Elderberries. The members are English, Canadian and French and they’ve influenced us and helped us a lot. Sinner Sinners wouldn’t even exist without those guys. I know they plan to cross the ocean to play gigs in US pretty soon. Also, (Damien Stetson) our former bass player’s band f*cking rock and are amazing song writers.

The Takeaway:
RiceburnerFM thanks Sinner Sinners for making the time and effort to answer all of these questions. RiceburnerFM recommends Sinner Sinners’ EP Sin Sin Sin [Explicit]. Also stop by their website for a preview of their new album and some free MP3s! 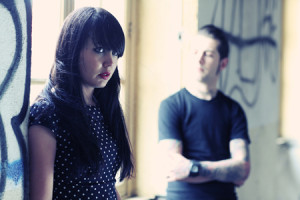 All photos by Jean Charles Belmont and Lucie Mazeron.
(www.jeancharlesbelmont.com)