Music Review of meaTone by Falsies On Heat from Japan

Meat on those Bones

meaTone by Falsies On Heat has some singsong qualities, animal noises, cartoonish voices, sampling and lotsa cursing. All of which makes meaTone seem more like an experimental album, but it does indeed … rock! To get the meat metaphors going, this is girl garage punk prime rib.

Falsies On Heat, an all girl punk band from Japan, sing in English with a little Japanese sprinkled in. Despite that, the lyrics are difficult to make out just by listening alone. To understand what Falsies On Heat are saying on their album meaTone, listeners will have to check out the peculiar and sometimes misspelled lyrics included.

While the front cover design is somewhat less than inspired, a quirky but compelling illustration adorns the back of the CD cover (see picture on bottom). Odd that they are not in the same or similar style.

According to their myspace page their situation has changed, but here the line up was:

An eclectic assortment, but the choice cuts are below:

NO NEED … wastes no time, gets right to rockin’.

Aphrodite … weird talking over each other opening, fun begins at 0:18, closest thing to a mainstream track here.

The Takeaway:
Riceburner.FM recommends meaTone by Falsies On Heat for riot girl / Bikini Kill fans or those with adventurous tastes. However the easily intimidated may want to look elsewhere for their audio nourishment. 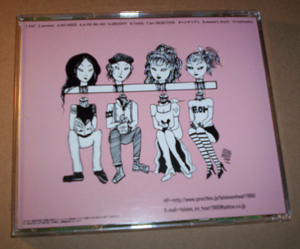 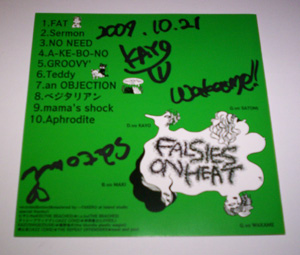 Falsies On Heat are no more.
Maki & Satomi are now joined by new drummer … Tomo.
Check out the Harpys!