The Comes were a female fronted foursome from Tokyo. Active from the early to mid eighties, the Comes were true punk pioneers. Their songs are short sharp audio blasts that showcase the snarling / singing of vocalist … Chitose. Their first album No Side + 3 tracks is considered a Japanese punk classic. The band split up after their second album Power Never Die, which was less well received and delves into metal. The Comes metal transformation is not surprising, listen to the tracks for hints of that change.

After the Comes, Bassist Minoru went on to create the band … Lip Cream and guitarist Naoki along with drummer Matsumura started another band … Gastank.

Long out of print and hard to find, all of the tracks here have been digitally remastered. The Comes’ first album No Side + 3 tracks includes several of their even-harder-to-find 1982 releases. No corrections were made to the original misspelled English track titles.

8. Ningenn Gari, time … 2:18
Closest thing to a pop beat on the album with almost out-of-breath singing.

9. Panic, time … 1:46
Best of the lot. Howling “Panic” as a hook with a relentless stomping beat. Should be mandatory listening for all punk wannabes.

12. Kane, time … 1:05
Despite being somewhat muffled this live track is full of pure punk energy and bleeds into the next track.

14. Dead Body, time … 1:43
Simple, but effective live track with most fun to sing along to / best lyric … “Dead Body”.
Singer Chitose finally seems to be winded.

check your ears for blisters

1. Brains, time … 3:59
Nothing to do with zombies, an intriguing film noir-ish spoken intro.

4. Power Never Die, time … 3:02
Start and stop guitar work, lyrics as mantra on the tail end of the song.

6. As A Rabitt Of Human, time … 5:16
A stunner, but way too long. Chitose seems to have a bit more of a struggle with the English pronunciations here. Track has some other muted live audio mixed in at 4:23.

The Takeaway:
RiceburnerFM recommends The Comes, No Side plus 3 tracks and Power Never Die.
It is an all too brief discography / journey from classic punk rawk into proto-nu-metal. 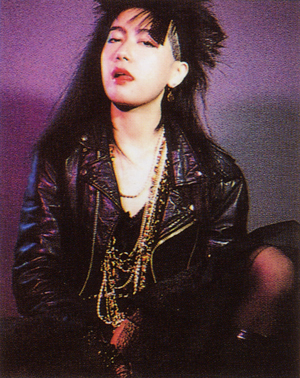