Music Review of Akirameruka? by Lolita No.18 from Japan

Samples provided by the Benten Label.
Lolita No.18 is part of the Japan Nite 2011 tour.

Japan Nite 2011 Spotlight: Music Review of Akirameruka? by Lolita No.18!

Akirameruka? is the latest offering from the Japanese all girl punk rock outfit … Lolita No.18. From 1989 to 2001, the original line up made a name for themselves by touring extensively and creating a lengthy discography. In 2002 after the rest of the band had moved on, lead singer Masayo recruited new members and began the next phase in the band’s odyssey.

Despite the changes in the band’s make up, Lolita No.18’s trademark sound, a mixture of squeaky cartoon-ish vocals and old school high energy pop punk, remains the same.

Unlike many Japanese bands Lolita No.18 continues to perform mostly in their native language. The album track listing is in Japanese as well, but they are Romanized here with some thoughts …

2. Saraba, Seisyun No Setsuna, time … 2:52
More poppy than the rest of the tracks, with an extra helping of bass and a “bye bye” in English at the end.

The Takeaway:
RiceburnerFM recommends Akirameruka? by Lolita No.18.
Not sure what the title “Akirameruka?” means, (possibly some mix of Akira and America?)
but RiceburnerFM will translate it into “a lot of punky fun!”. 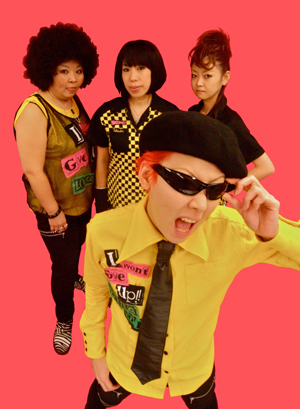