Music Review of [euphoriaofeuphobia] by white white sisters from Japan

Samples provided by the Benten Label.
white white sisters is part of the Japan Nite 2011 tour

[euphoriaofeuphobia] is the first mini album from the Japanese electro pop duo … white white sisters. white white sisters create elaborate soundscapes that are mostly accessible to the non-electro friendly ear. They accomplish this by mixing rock and electronic / electro components in their music.

The band consists of Yuya Matsumura in charge of vocals, guitar, programming and Kazumasa Ishii on drums. They are joined for their live performances by VJ Kouta Tajima. This talented twosome started out in 2008 and in the short time since have performed at some of largest music festivals in Japan, including SUMMER SONIC 2010 in Tokyo, MINAMI WHEEL 2010 in Osaka and SAKAE SP-RING 2010 in Nagoya.

1. Falling Down, time … 4:47
Didn’t get or get into this track at all. Seems to be reaching for industrial or noise, but attains neither.

3. Pigs, time … 6:33
Too long, loses steam towards the end, but an entertaining trip until then.

The Takeaway:
RiceburnerFM recommends [euphoriaofeuphobia] by white white sisters with the stipulation that the listener should be open minded or predisposed to electronic / electro, experimental or industrial music. 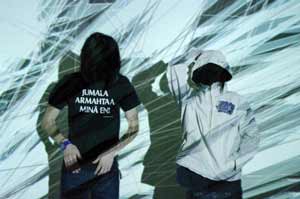