Cheeky Parade is a nine member idol music group from Japan. They formed in 2012. While in New York City recently, Cheeky Parade performed in two coveted New York venues … the NY Comic Con and the CBGB Music Festival. Despite their very busy schedules, two of their members were kind enough to respond to RiceburnerFM questions via email.

RiceburnerFM: At what age did you know that you wanted to be a performer and who was the artist that inspired you to be on stage?

RiceburnerFM: Cheeky Parade has played large venues before their New York City appearance, do any of you still get nervous before a big performance? Are there any pre-performance slightly superstitious rituals that Cheeky Parade goes through before a show?

Yuuna Sekine: Before every live performance, we form a circle with our hands holding together and focus our hearts to become “one.” Every time before we go on the stage, we do this and it makes us feel much better!

RiceburnerFM: Will the members of Cheeky Parade get some time off for sight seeing in New York City? If so, what is the one thing that you most want to see or do while you are in NYC?

Rino Shimazaki: Yes, we did go do sight seeing a little. My favorite sight was the statue of the liberty that we got to see from the ferry!

we researched as much as we could about CBGB

RiceburnerFM: Since there are nine members of Cheeky Parade, how many support people (hair dressers, wardrobe, make-up, etc.) are on the tour with you now?

Cheeky Parade Group Manager: It depends on the size of the performance or the projects, but usually the whole crew is between 10 to 20 people!

RiceburnerFM: Cheeky Parade is performing at the Third Annual CBGB Music and Film Festival. Were you aware of CBGB’s place in Rock and Roll history before your tour?

Rino Shimazaki: Yes! As soon as we found out we were performing on CBGB, we researched as much as we could about CBGB and learn its history!

RiceburnerFM: Jpop and Kpop are both very well liked in the United States, do you think that there is a friendly rivalry between Jpop and Kpop?

Yuriya Suzuki: I definitely think so! Kpop is constantly evolving, and I believe Jpop is also evolving in the same way. Because of this friendly rivalry, I think the music scenes in Asia is making an interesting progress overall.

RiceburnerFM: On August 16th 2014, Cheeky Parade was appointed Japan Pop Culture OKAIMONO Goodwill Ambassador. As an ambassador, what is your message to the music fans of New York City and the United States?

Yuriya Suzuki: As the Okaimono Goodwill Ambassador, we hope that many people will come visit Japan and enjoy shopping (okaimono)! We want people in abroad to know that Japan will be waiting them with all kinds of great food, goods, and services that will satisfy the visitors!

RiceburnerFM thanks Yuuna Sekine and Rino Shimazaki of Cheeky Parade for taking the time to answer these questions and NewEdge PR for arranging the interview. 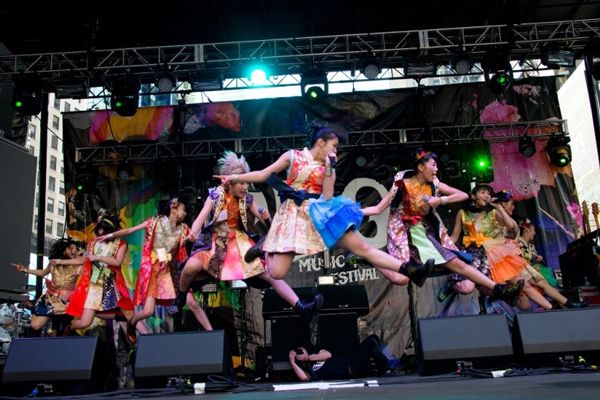