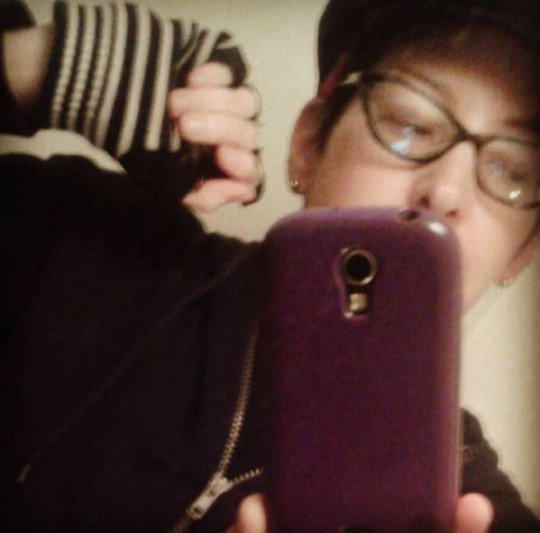 originally published on riceburnerfm.tumblr.com on 2-16-2016

It is not everyday that you get to interview the person who wrote your favorite song.

You know the song that plays in the back of your head even when you are listening to some other tune. Your personal mantra that gets you through muzak filled elevator rides, painfully long supermarket lines and life’s tougher times as well.
Yeah that song.
For me that song was written by Holly Beth Vincent of Holly and the Italians fame. Recently I have had the distinct privilege to interview via email the legendary musician, but first some back story.

Many, many moons ago in a crowded high school hallway, out of the corner of my eye, I glimpsed a tiny Holly and the Italians button on someone’s jacket. Something about her band name stayed with me because weeks later when her band name popped up again in the bin at the local independent record shop, I stopped thumbing though the other albums to check it out. Holly on the album cover is in a pretty pink prom dress but she has a rock and roll attitude on her face. The back cover features Holly in 80s leather finery, a silent screen star would envy her expressive eyes with their yeah-I-know-I-am-cooler-than-you look.

My adolescent impressions of course, but I purchased a copy of Holly’s first album the Right to be Italian (Virgin, 1981) by Holly and the Italians on 12″ vinyl for the whopping sale price of $5.99. I bought Holly’s record mostly on impulse, however the songs, lyrics and attitude help to shape my musical tastes to this day. It became the standard that I hold all other albums to.

Some years later I dragged my then-girlfriend to see Holly playing at a club in NYC. As I walked in to the club I immediately saw Holly at the front entrance. I thought that it could not be her as she is headlining and that she can not be walking among the crowd, the rabble like myself. I dare not approach her, at least not before her gig.

It took me a while to remember the last name of the then-girlfriend that I went there with that night years ago but I remember clearly that Holly wore ripped jeans as she played my favorite tracks to a small but enthusiastic crowd on a week night. Now I have been to my fair share of concerts before and since but no one has ever been cooler on stage than Holly that evening.

After the show Holly spent a few minutes signing autographs and she chatted for a bit with me. It was a long silent ride home with the then-girlfriend.

Flashforward X number of years into the age of social media.

A Holly Beth Vincent Google search will bring up a few “whatever happened to …” and a couple of “the woman who should have been the next …” but these posts in the search results are not correct. Holly never left and she never stopped being creative. She still resides and performs in Los Angeles. She still makes her art: music, photography, writing all on her own terms. Holly has always been her own person. She does things her way at her own pace. Holly is insightful, engaging and was kind enough to answer a few questions for RiceburnerFM.

RBFM – What is the make and model of your favorite guitar and does it have its own name?
HBV – Guitar wise I always use a Squire Strat with a hot rail or a humbucker pickup as it gives extra power. No name. They are disposable guitars which I like. My current one has a pretty sunburnt finish.

RBFM – You are originally from Chicago, but you formed your band Holly and the Italians in Los Angeles, a rock and roll Mecca. Before the release of your first album, the Right to be Italian, your band spent time performing in the post punk atmosphere of London. What effect did these locales have on your music?
HBV – I formed my band Holly and the Italians as part of the Masque punk scene. I was inspired by the minimalism, directness and accessibility of the music. Also by the humor, the wit of it. In Los Angeles the punk scene was very artistic but not gender conscious. In London I just did what I was already doing musically. I was successful very quickly, within a few months I was offered label deals by most everyone. I like the gloom of London and perhaps the climate helped. I lived there before and had always liked it.

RBFM – With an emphasis on lyric writing, walk us through your creative process, how does HBV craft a song?
HBV – Writing wise I just feel a mood or have a melody in mind then focus and let the songs happen. I try not to censor myself. Songs happen to me and often.

RBFM – My favorite song ever is your song “I wanna go home” which has been playing in my head for several decades now. The track is a catchy three minute-ish pop punk ode to your life in Los Angeles written while you were away gigging in London. It is well crafted word-play that deftly twists together pop culture references, commercial slogans and easily relatable young adult drama. The song is a personal statement from, for and about you (”see my name in the Hollywood Hills”), but if you were to rewrite this piece today as the older wiser adult that you are, what pop culture references, commercial slogans and easily relatable older wiser adult drama might you include?
HBV – Regarding my song “I Wanna Go Home” I’d leave it as is. California culture is still pretty much the same except for the movie watching references could be cable or internet based. But not likely. It holds true in all aspects today. Including the sometimes strangeness of American life.

RBFM – You are probably best known for the retro-new-wave-timeless-classic “Tell That Girl To Shut Up“. The song was a big hit for the British band Transvision Vamp in the UK in 1988, years after your original version was released. Did “home court advantage” and a slick video play a part in their success with your tune?
HBV – In regards to my song “Tell That Girl to Shut Up” and Transvision Vamp’s cover version, I loved it. I liked the recording quality, Wendy’s delivery, production, the video. My version which was a hit, is an eight track recording for Charlie Gillett’s Oval Records, so you don’t hear it on today’s radio as it’s sonically not sophisticated enough. It would be good to create a better version of the song today on my own as the Virgin album version didn’t get it right .

RBFM – As someone who knew and worked with Joey Ramone, what do you think when you see kids today wearing a Ramones t-shirt?
HBV – I love seeing kids or anyone in a Ramones t-shirt. It’s a great design and a good reminder of a band that I loved and many people love still.

RBFM – “Tell That Girl To Shut Up” and “I Wanna Go Home” both sound like great Teen Nick movies titles and over the years 80s music covers have popped up on soundtracks for film, video games and in various commercials. Your thoughts on licensing your music in such a fashion?
HBV – I’ve had some song placements in films and television including an MTV series and an American Idol episode. I’m actively looking for more opportunities with my publishing administrator BMG.

RBFM – If each of your albums were chapters in a book and that book was your autobiography, what would the title of your autobiography be?
HBV – My albums are journeys and only slightly autobiographical. There is a lot of fiction and imagination at work in these songs. I’m not sure about chapter titles or an autobiography title since my work is ongoing. I have a lot more music in me.

RBFM – Holly circa 2015 please give Holly circa 1980 the advice that she and all aspiring  musicians will need to fulfill their dreams or at least survive in the “biz”.
HBV – I prefer the short version of this answer, which is to simply remember that once you enter into a business agreement with someone, though it’s about art, everything is business. The people and events around are about business and making money which is what it’s supposed to be. Keep your private life and good friends apart from that and you should be fine. Also be aware of your business as you may at times have to make tough decisions.

RBFM – You have tech-house music out under the pseudonym Yllohas. How did this project come about and what can your fans expect from your latest endeavours? Also why not record again as Holly and the Italians?
HBV – The EDM tech house music came out of an interest and enjoyment of using my computer and wanting to create music autonomously, when and where I want. I started that in about 2010. If I have another band I will probably call it Holly and the Italians since it’s a semi-brand or just record as myself again. Or both. I’m mid career, as I said.

RBFM – Final thoughts?
HBV – Thanks for asking these questions. I think sometimes people assume things about artists without actually taking to them. There’s usually a simple logical undramatic answer for most things if you ask. Being a writer, musician, performer is work intensive and there’s not much room for goofing off.
And that’s it!
Peace please everyone —

RiceburnerFM thanks Holly Beth Vincent for her time and effort with this interview and writing my favorite song ever.