Swish of Swish and Flick Interview 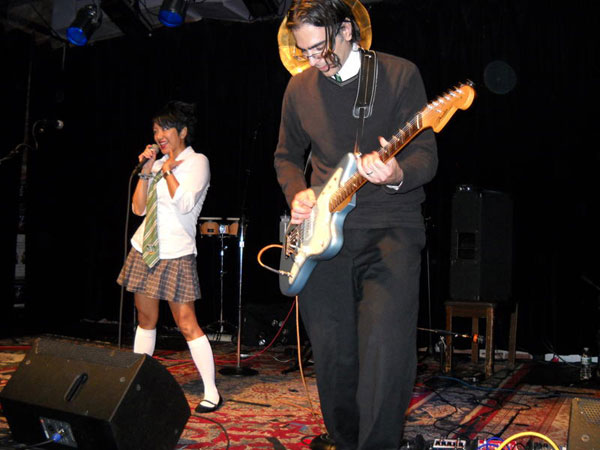 If you are unfamiliar with the series of books and movies about J.K.Rowling’s Harry Potter, it is best that you move along right now. For the rest of you, the documentary We Are Wizards

will get you caught up on the growing and tight knit fan based movement called Wizard Rock.

In brief, Wizard Rockers are musicians that are Harry Potter fans and write original songs based on the adventures of the boy wizard. Their songs are usually written from a particular character’s viewpoint. Sometimes the songs are similar to fan fiction in that they feature unlikely pairings (example: Harry and Draco snogging).

The NYC Wizard Rock Festival (WRNYC) is an all day, all ages event created and run by HP fans. WRNYC features 15 of the top acts of this genre and will be held at the Music Hall of Williamsburg on Sunday, November 21, 2010. One of WRNYC’s organizers is Swish from the popular Wizard Rock (or wrock) band Swish and Flick

Swish was kind enough to respond to questions emailed from RiceburnerFM.

RiceburnerFM: How did you go from fan to wrocker to event organizer?

Swish: I’ve been reading Harry Potter since 2000 and had no idea that the fandom existed until after I finished reading the final book. Then I discovered all aspects of the fandom within a few months, including wizard rock. I started writing rap lyrics as a joke and circulating it to my friends on e-mail. When I saw Draco and the Malfoys perform for the first time, I knew I had to take this joke and turn it into Swish and Flick. I was shocked to find that NYC didn’t have any large scale wizard rock events, so I took it upon myself to organize the first NYC Wizard Rock Festival in 2008.

RiceburnerFM: As Swish (of Swish and Flick) you are performing in WRNYC. As Stacy Galore you are organizing WRNYC. Are there any conflicts that arise from having duel roles at an event of this size?

Swish: I have to remember to give 100% as both a performer and as an organizer, which is difficult to do as far as my energy and my time commitment. Not only do I have to rehearse for my performance and prep for my band’s appearance, I have to promote the event as a whole and co-ordinate 13 other bands.

RiceburnerFM: Are there any social issues that WRNYC is involved with?

Swish: The NYC Wizard Rock Festival is not linked to any charity, nor is it a charity fund raiser or an event to raise awareness of any particular social issue. We are not in it to make a profit. We just want to put on a good show for wizard rock fans. If there is any money left over after all expenses are paid, we’ll likely donate it to First Book, which is what we did in 2008.

RiceburnerFM: A band rider lists what performers expect the venue to provide them with.
It covers everything from onstage equipment to backstage refreshments.
Some celebrities have seemingly strange demands in their riders.
Do the Wizard Rockers need anything unusual to perform?

Swish: The bands have actually joked about this, but they are pretty laid back and don’t expect anything outlandish. I believe it was Brian of Draco and the Malfoys that demanded a Hufflepuff run out on stage during their set bearing sandwiches… lit on fire. (The Hufflepuff. Not the sandwiches.)

RiceburnerFM: Star Trek has Trekkies, Star Wars has Jedi, but why was it not until Harry Potter came along that fan bands started?

Swish: I believe it is because those other fandoms grew and existed for a long time in absence of the Internet and internet-based social networking. When the HP fandom began, the Internet was already being used by fans and thus wizard rock grew with it. The easy accessibility of wizard rock made it attractive and easy. You could put yourself on Myspace, call yourself a wizard rock band, and you’d automatically have people listening to your music based on nothing but a mutual love for Harry Potter. When the Star Trek and Star Wars fandoms began, musicians needed record contracts and radio exposure to be heard. Today, musicians can distribute and promote themselves completely independently from the music industry, and in this environment, wizard rock grew.

RiceburnerFM: What is it about the Harry Potter book series that made you want to perform Wizard Rock and why did the sorting hat place you in Slytherin?

Swish: Harry Potter didn’t make me want to perform wizard rock. Wizard rockers made me want to perform wizard rock. I’d been a musician for nearly my whole life, performing in bands since I was a kid, and never before had I found such a supportive community. The books, of course, provided so much tangible inspiration that could be understood by fans and bands alike. With “regular” music, a fan can not directly identify with the inspiration for a musician’s lyrics as easily without a common experience-base. With wizard rock, we have that common experience-base (the books and the movies).
I sorted myself into Slytherin because I like writing about bad kids that do bad things. It’s more fun to be evil.

RiceburnerFM: Your songs are meant for the older Potter fan. Was this a conscious decision to market yourselves as an alternative to the PG type wrock bands or is it a natural outgrowth of your song writing?

Swish: When I started writing wizard rock lyrics, they were inside jokes between me and my adult friends and not meant for a larger audience. When I decided to make it public and start a real wizard rock band, I didn’t bother censoring myself because I knew I’d be performing mainly for my adult friends and other adult Harry Potter fans. At the time, there really wasn’t any wizard rock geared towards adults, though millions of adults read Harry Potter. As we grew and became more popular, I still didn’t want to censor myself. I don’t mean to alienate children and sensitive listeners. I’m just being myself. And I happen to have a really dirty sense of humor.

RiceburnerFM: What advice would you give performers just starting out in the Wizard Rock world?

Swish: Now that the movement has grown so much, it is quite easy for wizard rockers just starting out to get lost amongst the hundreds. If a new wrocker aspires to be heard and appreciated by a widespread audience, first and foremost, they have to put out quality music. It doesn’t take much to polish up your sound, even if you only have a computer and a built-in microphone. Put a little effort into cleaning up your recordings. Download free software for this purpose or find other musicians to help you record, mix, and master your stuff. And don’t wait for events and shows to come to you. Create your own events and shows. If a fan base doesn’t exist in your area, create it. There are millions of HP fans, thousands of which don’t even know wrock exists. Find Potter fans and make them wizard rock fans.

RiceburnerFM: Given the meteoric rise of the Wizard Rock phenomena, look into your crystal ball and tell fans what the future holds for Wizard Rock.

Swish: I wish I knew. I can only hope that it continues to grow and flourish. But it can’t do so without an active, supportive community. It will die if people stop caring and become complacent. This community and fandom only exists because of the fans. Fans can’t expect events and things to just happen. They have to make it happen and support them when they DO happen.

RiceburnerFM: Plug WRNYC! Tell the casual Potter fans, who may not know much about Wizard Rock, what they can expect at your show. 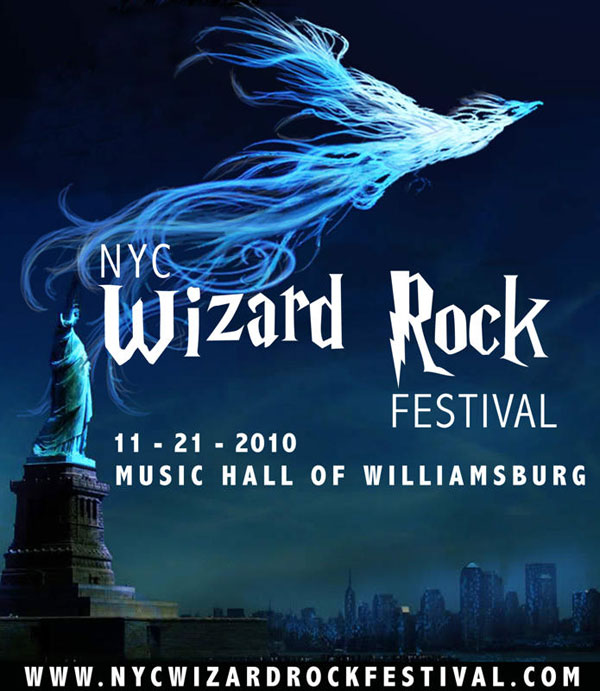 After the success of the sold-out 2008 show, The NYC Wizard Rock Festival returns on November 21st, 2010. This year’s festival will feature Ministry of Magic, the six-piece vocal powerhouse, along with 14 other stellar wizard rock bands. The all-day, all-ages concert will be held at Brooklyn’s premier indie rock venue, The Music Hall of Williamsburg.

Inspired by the popular book series, wizard rock is a subset of the Harry Potter fan culture that’s grabbed the attention of MTV, Time Magazine, The BBC, and The Village Voice. The NYC Wizard Rock Festival will not only attract sci-fi/fantasy die-hards, but also lovers of independent music.

Draco and the Malfoys

The House of Black

Madame Pince and the Librarians

Tonks and the Aurors

Tickets are $20 in advance through Ticketmaster.com and at select Bowery Presents box offices. $25 at the door.

RiceburnerFM thanks Swish of Swish and Flick for her time and effort in answering all of these questions. Check out all of the talented and dedicated music makers with the links provided.