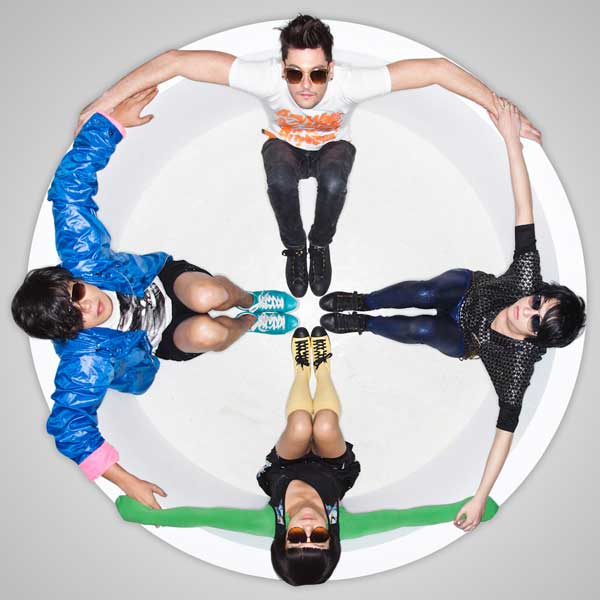 International superstars Pet Conspiracy have been making music since 2007. After several changes in the line up, two well received EPs and a reputation for over-the-top live performances, Pet Conspiracy has released their first full album, Chongwu Tongmou.

They were kind enough to answer a few questions via email.

RiceburnerFM: Your new release is Chongwu Tongmou. Compare it to your earlier works, changes in the band’s line-up aside, how has Pet Conspiracy’s music evolved?

Pet Conspiracy: Mary: Probably “chongwu  tongmou” is more aggressive and darker than previous pet conspiracy works. It reflects a long process of growth and development of our identity as a band. it is also more eclectic, since it is featured by various styles, from punk, to electro, from funky to goth … it is kind of schizophrenic I guess.

RiceburnerFM: What is the biggest misconception about Pet conspiracy?

Pet Conspiracy: Mary: that we are supported by a big team to do the stuff we do. We are actually completely independent, we never signed to any labels, and we are self managed and self produced, from the music, to the stage set up, to the performance.

RiceburnerFM: What was the first band or performer that you ever saw live? Do they have any affect on what you are doing with your music today?

Pet Conspiracy: Mary: Helmet, when I was fourteen. Since it was probably one of the most fierce pogo i ever experienced  in my life, and I was so tiny and got almost torn apart, now rolling down with Fiona out of the stage or launching myself on hundreds of screaming Chinese seems to me like  a healthy and safe Sunday walk in the park.

Pet Conspiracy: Edo: A terrible Italian pop singer in 1989. It was really awful, but at least it helped me to understand the kind of music I would never do in my life.

Pet Conspiracy: Huzi: I can’t remember clearly the first show I’ve seen. All the influences I got during these years are transformed into something new while making my own music.

RiceburnerFM: Pet Conspiracy is known in part for their elaborate avant-garde spectacles on stage. While creating a song, do you think about how the song be performed in concert?

Pet Conspiracy: Huzi: Creating a song and thinking how the song will be performed in a concert always come together for us, they can’t be split. For Pet Conspiracy, live show is the most important way of communication.

Pet Conspiracy: Mary: By the way, there are no rules on this … sometimes we just throw the song out, and we build up visual concept later, some other times there is no concept at all and the performance is just improvised on stage.

“live show is the most important way of communication”

RiceburnerFM: There is a lot of fear mongering from politicians in the west regarding China’s economic rise. How can music in general and Pet Conspiracy in particular with members from China and Italy, help to bridge the gap between East and West?

Pet Conspiracy: Edo: We are now one of the rare examples of multicultural bands in China, and we are proud of this. There is no such a huge distance among us and the Chinese by the way, especially those of the younger and underground generations. This is particularly true with Italians and Chinese, we both like to eat, to drink and to be lazy!

RiceburnerFM: Your thoughts on performers / bands who are essentially products of large multi-national media corporations?

Pet Conspiracy: Mary: Till a few years ago they were like Satan to me. Now I don’t like them, I don’t listen to their music, but still I recognize that they are basically doing their job, so they don’t bother me that much anymore.

RiceburnerFM: A band rider lists what performers expect the venue to provide them with. It covers everything from onstage equipment to backstage refreshments. What is the most outrageous item on the Pet Conspiracy rider and which member of Pet Conspiracy requested it?

Pet Conspiracy: Edo: In China I request toilet paper. It seems that in this country toilet paper is on the outrageous items list.

RiceburnerFM: What is the one song that you can not be without while touring?

Pet Conspiracy: Mary: I just want silence to sleep before the gig, or I can get very very violent …

RiceburnerFM: What other bands on the Chinese music scene should music fans in the West be checking out?

RiceburnerFM: You are old and gray, you look back at a long life. What do you see? (In simpler terms, what do you think Pet Conspiracy’s legacy will be?)

Pet Conspiracy: Huzi/Edo: It is hard to say … by the way a long life doesn’t really sound realistic to us!