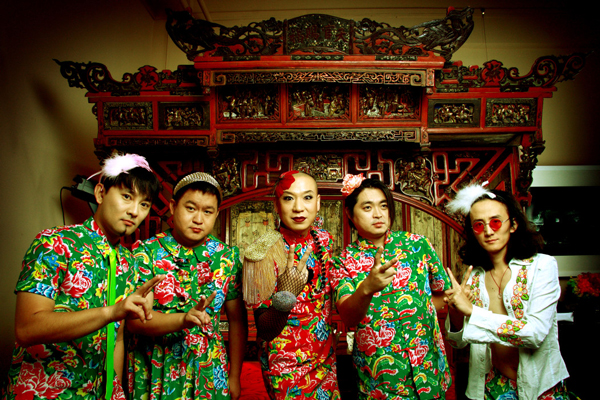 Second Hand Rose is one of the most popular acts in China, they fuse traditional Chinese music with modern rock and roll. Known for their elaborate stage shows, they formed in Beijing in 2000. While they have had many changes in their line up over the years, their constant driving force is lead singer Liang Long, who was kind enough to answer a few questions via email.

RiceburnerFM: Give one word to describe the Chinese rock scene prior to Second Hand Rose’s creation.

Liang Long: In a sentence: from the utopian passion of Having Nothing to My Name [Cui Jian’s signature song] to the awkward situation of ‘Brother, what the heck are you playing rock for’ [our signature slogan, reacting to the situation rock was in at the time].

Liang Long: We’ve kept ‘second hand’ in our name, but its meaning changed. For instance it refers to copying and imitating but also to experience.

Jeroen: I think it’s a way of being in the world. Connected, embedded, hybridized, rather than creatio ex nihilo. Much of our music also combines chunks (idioms?) with different origins and creates something new out of them, perhaps reminiscent of pastiche or medley, but then with an additional layer of interpretation / adaptation.

RiceburnerFM: Take us through Second Hand Rose’s creative process, who does what and how does an idea become a song?

Liang Long: We don’t have a fixed creative process. Ideally we take inspiration from daily experience and will not shy away from any method in pursuing it.

RiceburnerFM: In Second Hand Rose’s recent public relations release, the band states their intention to go after a worldwide audience with this in mind, what considerations if any does Second Hand Rose make for the non-Chinese market when making music from now on?

Liang Long: We won’t change our sound. But we will develop new, creative ways of presenting our music, to give also people who don’t understand the Chinese language a complete, multifaceted experience.

“We don’t have a fixed creative process”

RiceburnerFM: Fashion, androgyny, on-stage theatrics and Rock-N-Roll are not strangers to one another, what new element does Second Hand Rose bring to this mix?

Liang Long: We strive to avoid being defined by fashion, and to see cross-dressing as [a kind of] release. Our new element is ‘Useless Rock’.

RiceburnerFM: Second Hand Rose’s clothing line is called Red & Green, talk about the inspiration behind the clashing colors of this fashion statement.

Liang Long: Red & Green, dog farting competing. Red & Green, a drama on its own. [the first half is a nonsensical Chinese folk saying, the second rimes with it]. The color combination is typical of northeastern Chinese culture, and their clash, gutsiness and playfulness happens to chime in really well with my approach to rock music.

Liang Long: We are still in finding out.

RiceburnerFM: What is the strangest experience that you have had while on Second Hand Rose’s “Useless Rock” North American tour?

Jeroen: the tour hasn’t started yet.

RiceburnerFM: In 1985 Wham! was the first western pop band to play in China. If you were booking that gig today what band besides Second Hand Rose would you book to open for Wham! and why?

RiceburnerFM: Asian American artists are vastly under represented in the American media. What words of encouragement does Second Hand Rose have for them or any other performer about getting their music heard?

Liang Long: Of course everything starts with creating music art that has true value and that commands respect. Next to that there must be enough money.

RiceburnerFM thanks Liang Long of Second Hand Rose for taking the time to answer these questions, Jeroen Groenewegen-Lau for translations and Eric de Fontenay of MusicDish for arranging the interview. Apologizes to all that the Chinese version of this interview is having some “operating difficulties”. 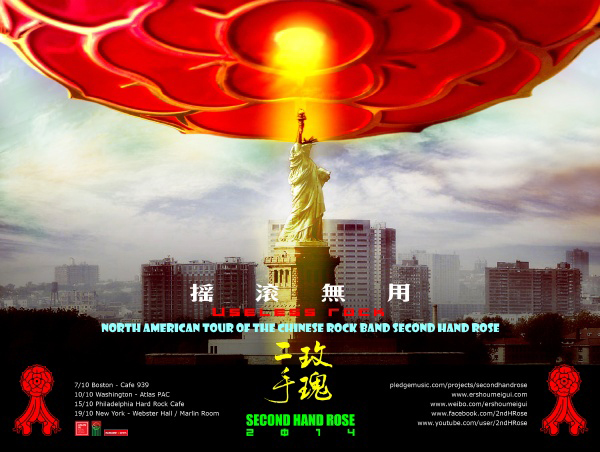