Music Review of TWIN GATE by exist†trace from Japan

Visual Kei Girls at the Gate

Twin Gate is the new release from exist†trace. Twin Gate is a mix of old and new songs, but all of the tracks are infused with the same sweeping sense of grandeur that is usually associated with period piece movie soundtracks.

exist†trace is one of the first all female visual kei (VK) bands from Japan. Visual kei’s primary musical influences are metal, goth and punk. Style wise the look draws upon flamboyant 80s hair metal, androgynous glam and a splash of kabuki theater. The desired result is an other worldly performance by larger than life beings.

When it comes to musical ability, exist†trace’s male VK counterparts have nothing on these ground breaking ladies. On Twin Gate, exist†trace rocks with solid well crafted tunes and stunning vocals. The only piece of constructive criticism to offer is that a live track might have been included to break things up a bit.

exist†trace formed in 2003 and their members are:

2. Orleans no Shoujo, time … 4:03
Opens strong with graphic vomit-growl at 0:27. Does not let up with impressive guitar work throughout.
Song also available on exist†trace’s VANGUARD -of the muses- album.

8. unforgive you, time … 4:25
Military drums, touch of funk in the guitar riffs and soaring vocals.

The Takeaway:
RiceburnerFM recommends TWIN GATE by exist†trace. Twin Gate is a compelling assortment of soundscapes and serves as an excellent introduction to this intriguing band. 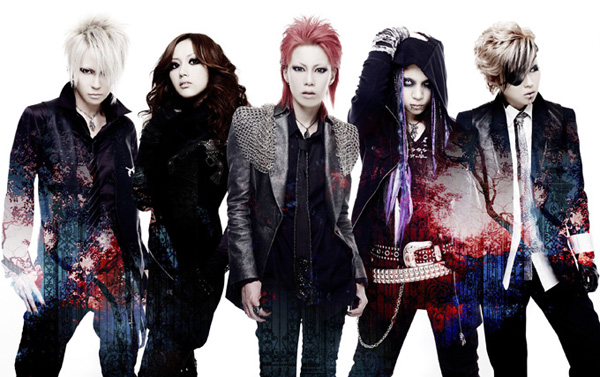 Notes from the good folks at JapanFiles: 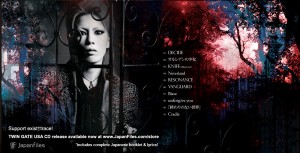 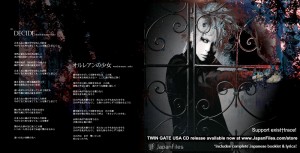 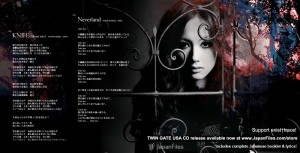 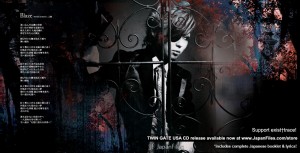 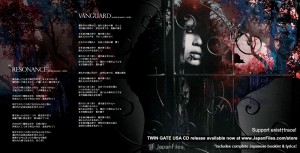 booklet and artwork above courtesy of Monsters, Inc. / JapanFiles